Conceived in response to the "Polish Righteous - Recalling Forgotten History” project at Warsaw's Museum of the History of Polish Jews POLIN, Nistarim (Hebrew: “concealed ones”) draws on the museum's online and physical archives pertaining to the Polish Righteous Among the Nations - individuals who provided help to Jews during World War II.

In its final form, the installation will include 36 object/instruments (the number of "Tzadikim Nistarim" or "hidden righteous ones" in every generation, according to the Talmud), each evoking a personal item from the museum's collection - relics instilled with the remarkable stories of ordinary people who did extraordinary things.

A recurring form throughout all the objects is that of the chess pawn - a symbol of sacrifice. In chess, the pawn is the weakest piece yet the only one with the potential for self-transformation (by reaching the "other side”). But here there is a more specific resonance: in 1943, after the liquidation of the Kołomyja ghetto, Andrzej Śliwiak hid Pola Najder and nine other Jews in a bunker he built under his barn. While in hiding, Pola carved a complete chess set out of chestnut wood she found near the entrance to the bunker. The set can be seen today in POLIN's core exhibition.

Each sculpture in the series transforms the archetypal pawn form into structures derived from other items in the collection. Thus, one pawn becomes the fulcrum of a set of scales (based on one given to Emilia Waszkinel by Batia Weksler for agreeing to adopt her infant son Romuald, who grew up to be a Catholic priest and only discovered he was Jewish at the age of 35); another pawn assumes the figure of Saint Theresa (modelled on a picture found inserted into a Catholic prayer book carried by a Jewish girl in case she got stopped and interrogated).

These hybrid forms are then adapted further into musical instruments that are played by the wind. In the final installation, sounds produced on the 36 instruments by the wind will create a constantly evolving soundscape, into which will be embedded excerpts of audio interviews with the Polish Righteous ones themselves, sourced from the museum’s online archive.

Thus, past and present converse as the wind - both a symbol of freedom and (especially in southern Poland) an invisible source of destruction - elicits hitherto concealed sounds from the quasi-historic objects, allowing their stories to be heard in a completely new way.

Nistarim will open in Warsaw’s Ogród Sprawiedliwych (“Garden of the Righteous”) in June 2020 to coincide with the unveiling of three new additions to the list of Polish Righteous.

This project has been supported by Asylum Arts. 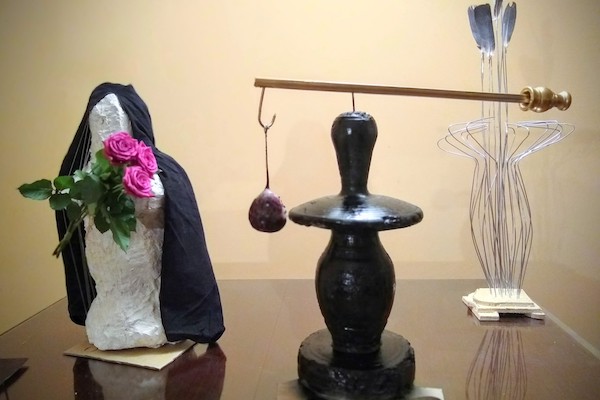