Since 2009 I have been composing music for multiple electric guitars, leading to the formation of the electric guitar ensemble Future Currents (with Chris Montague and Chris Sharkey), which released an EP of experimental miniatures (mixed by fellow guitarist Matt Calvert) in 2016.

In 2014, I was selected as one of two Composers-in-Residence at the Institute of Composing / Club Inégales through Sound and Music's "Embedded" programme (alongside Chris Corcoran). Throughout the following year I wrote a number of small-scale ensemble pieces for the club's resident chamber ensemble, Notes Inégales, and the residency culminated in a concert of our own music that Chris and I curated.

Change Without Change was written specially for this performance and featured saxophonist John Butcher as special guest. The musical material was developed in collaboration with the players over several workshops and, using specific gestures as starting points, allows for varying degrees of improvised manipulation as the piece develops. The form of the piece exhibits perfect fractal symmetry, also borrowing from ancient bell-ringing patterns (which themselves display various other kinds of symmetry). The title of the composition alludes to the mathematical definition of symmetry, as discussed in theoretical physicist Frank Wilczek's book A Beautiful Question: Finding Nature's Deep Design.

John Butcher and I also played an improvised duo set as part of the same concert. Here is an excerpt from that:

A piece I wrote for Alice Zawadzki's "Songs to the Moon" project:

Commissioned by Yurodny for the group's 2009 album Evenset, produced by Gilad Atzmon.

An early piece, written for Rise Saxophone Quartet and premiered by them at the 2007 Bray Jazz Festival.

In 2012 the London Sinfonietta put out a call for scores in connection with a concert of Conlon Nancarrow's music at the Queen Elizabeth Hall. The ensemble's recordings of the selected works - including my short piece for clarinet, violin, cello and marimba - were played as an introduction to the concert.

for jazz nonet. Winner of the 2011 Dankworth Prize for Jazz Composition 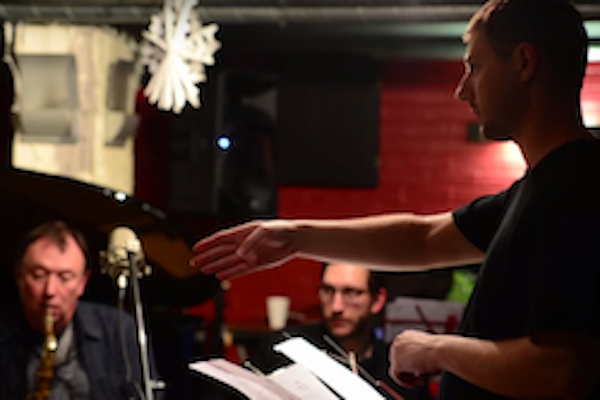